Under the patronage of the “TOOLS FOR LIFE” foundation, from 4/19 – 5/8/2013 the art exhibit “TOOLS FOR LIFE mal anders” from the EVIM Behindertenhile e.V. was available to seen in the ROTHENBERGER TEC-Center in Kelkheim.

The exhibit displayed more than 50 works of art from the art project “mal anders”, which were created under the guidance of artist Monika Niebergall. The artists are people with mental and physical handicaps, some who have been a part of the project for over 10 years. Central to their works is the artistic expression through painting and not as a method of therapy. Art is their tool in developing their individual personality, to free their talent and to express their emotions. “Mal anders” has already been successfully exhibited multiple times and enjoys high sales volumes. Also in Kelkheim: over the course of the exhibition the pictures sold generated a total of 10,000 EUR from which the art initiative “mal anders” profited 100%.

TOOLS FOR LIFE stands for helping people all over the world by providing them with essential resources – also in Germany. In the following project we selected the art initiative “Mal anders” (“something different” or “paint different”) from the Behindertenhilfe EVIM e.V. in Wiesbaden (Help for the Disabled).

Since 2001, “Mal anders” has been led by Renate Pfautsch, the president of EVIM Behindertenhilfe and the artist Monika Niebergall. The project is part of the organisations cultural work, which expands upon their therapeutic supervisory work. It is financed exclusively from donations and its existence relies entirely on external support.

With the art project, EVIM is not attempting to socialize handicapped people or train them in some craft so that they are of value to society. Rather, their focus is on helping to provide the handicapped with ways in which they can express their emotions, issues and individuality, which otherwise might not be available in their often physically, mentally or socially limited daily lives. 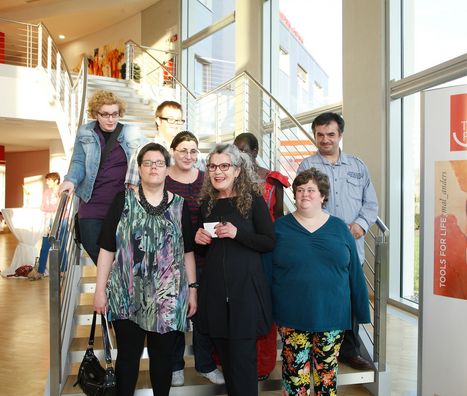