On December 3rd, 2015, Ingried Gerber, technical trainer at ROTHENBERGER, traveled to northern India and visited Abha Bhaiya’s project Jagorigrameen. Abha had presented her initiative, aimed at strengthening women’s rights and the role of women in India, at ROTHENBERGER in summer.

Ingried stayed until December 26th, 2015, using her own annual leave to run workshops teaching local young women basic technical skills. The training schedule included mechanical skills required for basic metal work. Students are thus capable of carrying out technical tasks around the house and farm themselves and can utilize their newly learned skills for additional income.

Ingried received ideas and consumables, such as sheet metals and stencils, from donations made by the Chamber of Trade and from tradesmen. The tools required on location in India were donated by the ROTHENBERGER AG. Weeks in advance, a palette packed full of soldering kits and reaming tool sets, as well as hand tools and other quality tools for metal work and pipe machining, had been sent to India. Thanks to the active support from ROTHENBERGER colleagues in India, the delivery was on site on time.

During her stay, Ingried ran two workshops; these were each two days long and took place over two separate weekends. The first training was attended by 29 students, the second by 17, all aged between 9 and 25 years. They undertook a journey of several hours, some from villages as far as 65 km away. Ingried and the participants created candle holders made from copper and soldered picture frames. Metal shears, file and hammer were among the tools used, and the participants did some soldering as well – everyone was concentrated and engaged, and had fun while working.

During a staff training, Ingried also trained caretakers and housekeepers at Jagorirameen in the area of electrical engineering. With Ingried’s guidance, the team installed new electrics in the staff room and built a work bench.

Everyone involved in the project agrees that new workshops for young women ought to take place in 2016. Ingried is planning another stay late next autumn. TOOLS FOR LIFE and ROTHENBERGER intend to be involved again too. 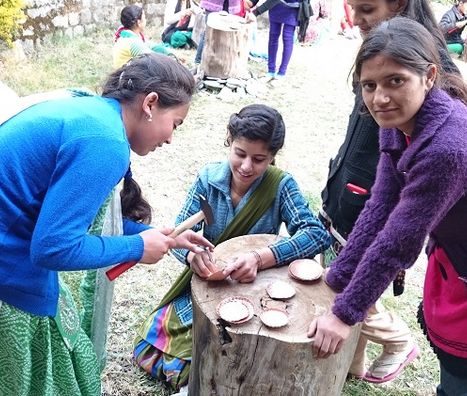