The village of Namouté with its 2,100 inhabitants is located in the savannah landscape in the north of Togo. The inhabitants live mostly from agriculture and cattle breeding. However, agriculture is only possible during the rainy season. Due to climate change, the time in which the fields can be cultivated is shortening and shifting. The population receives no government support or agricultural subsidies.

The community consists of 2 parts, which are 5 kilometers apart. The only clean source of water is the well next to the village school. Some students therefore have to walk several kilometers home with water containers after school. In the dry season it is the task of the women and girls to fetch water several times a day. In the rainy season, the inhabitants often drink polluted water from the nearby river or water from draw wells. However, these quickly dry up after the rainy season ends.

By building a pumping well, the whole village should have year-round access to clean water. To reach the water it was necessary to drill 90 meters deep. The well will be operable with a hand pump. A cover will prevent dirt from entering the water. In total, the well will be able to pump 1,200 liters of water per hour.

Access to clean water will help reduce the incidence of illness among Namouté residents. With secure water access, they have more planning security and are less vulnerable to storms and dry spells. The village community contributes to the success of the project by providing food and accommodation for the workers of the drilling company. 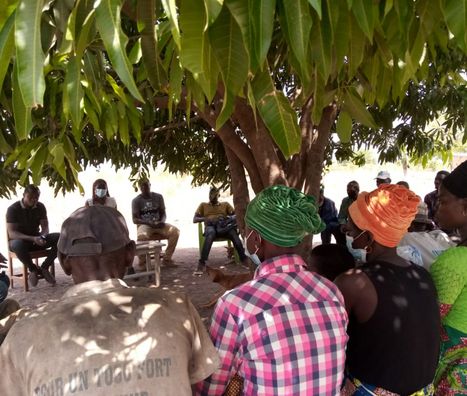 The village of Namounté is located in the prefecture of Kéran, in the north of Togo, 26 km from the small town of Kanté. The ethnic community of the Lamba live mainly in Kéran, have their own language and culture. Two thirds of the population in Togo live from agriculture and are therefore particularly affected by climate change. Persistent droughts and water shortages make for fragile food security, which is exacerbated by rapid population growth. 40% of the population is under 15 years old.
Learn more about the country