In the second project stage of the construction of a sanitation and drinking water facility for the Iyolwa Secondary School, Uganda, the water filter and storage facility has been successfully constructed and installed in just 3 months construction time. It will be launched at the school opening in February 2017.

Providing this facility as well as sanitation facilities is essential for the water supply and hygiene of the students. The construction of dry toilets and shower cubicles in the first project stage in 2015 ensures the equipment of the school with sanitary facilities and thus hygienic care. The step has a direct health-promoting impact. In addition, the concept of dry toilets avoids a longterm pollution of soil and thus groundwater.

In the second project stage the water treatment plant, that supplies both the sanitation complex with water as well as the students with sufficient filtered drinking water, was constructed. Water tanks with a capacity of 40,000 litres were installed for dry periods. For the water treatment, the tried and tested concept already implemented at the Ssama Primary School in Uganda in 2014 is used. Water supply and hygienic standards form the fundamental conditions for a regular school routine and thus help improve the education of children in the region.

During the building construction, Interlocking Stabilised Soil Blocks (ISSB) were used instead of the fired clay bricks common in Uganda. Used for the first time, ISSB are an alternative that is more environmentally friendly, of better quality and more economical to produce. ISSB wall bricks were made from local compressed clay mixed with cement and using a press. The special shape ensures a strong bond with minimal use of mortar. The press machine has been used in the building’s construction for the first time; in the long term, it will be handed over to members of the local community to give them the opportunity to make money and create jobs. 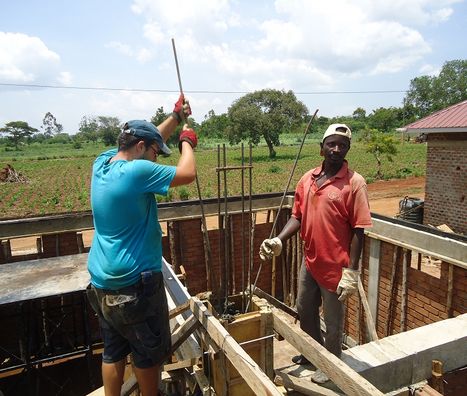 Pabone, the location of the Secondary School, is one of four municipalities in the subdistrict Iyolwa of the district Tororo and is located about 200 km east of the capital Kampala. Iyolwa has about 34,600 inhabitants and the area is largely dominated by agriculture. A public water supply does not exist. People use either rainwater, fetch water from public wells or drill waterholes. Often this water is polluted and causes illness. In the subdistrict Iyolwa there are seven overcrowded primary schools. The municipality Pabone, with more than 4,000 children, currently has no Primary School. About half of the 10,500 potential students in Iyolwa actually go to school. The project supported by us initially consists of the construction of a secondary school for 900 students. This is due to be opened in February 2017. The construction of a primary school for 1,100 students and a health clinic with 20 beds and a maternity ward is in the process of planning. The construction of the health clinic is necessary not only for the school but for the essential care in the neighborhood. The 2015/16 construction of the sanitation and drinking water complex supported by TOOLS FOR LIFE has been successfully completed. Both stages were realized by our project partner EWB within the planned time frame and budget. We are pleased that the construction project went so well and that 4 ROTHENBERGER staff members were involved in the project’s success as part of the staff trips ‚Your commitment - Uganda 2015 and 2016‘. More information on the project can be found on the EWB Website.
Learn more about the country