The first part of this project is done! The construction of the sanitation complex has been completed as planned and we are very happy that all went well. It's also great that two ROTHENBERGER employees supported the project in the course of this year's TOOLS FOR LIFE campaign "Your commitment 2015". More information about the project can be read in the blog of engineers without borders.

It is essential to provide basic hygienic care and drinking water supply for the planned construction of the Iyolwa Secondary School. However, expertise and financial resources for technical solutions are still missing on site. The Task Force Uganda of the NGO “Engineers without Borders” is working on the plan and design for a sanitation and a drinking water system since March 2015. The implementation of the project is divided into two parts of the project: A sanitary complex with dry toilets and bathrooms should be build first and then the installation of a cistern with water filters for drinking and domestic water.

Project Part 1: Establishment of the sanitary Complex (Summer 2015).
The construction of a modular expandable sanitary complex will be done in the first phase of the project, consisting of dry toilets and shower rooms realized. The complex is divided into two parts for girls and boys and includes a total of nine dry toilets, six showers and six hand basins. The calculation on the toilets is per recommendation of the WHO, which provides four toilets per 100 Students.

The principle of the dry toilets is based on the separation of urine and feces by a special shape of the collecting bowl of the squat toilet, which is frequently used in Africa. Advantage of the concept in comparison to the usual latrines is that the preservation of the groundwater, since feces are collected separately and do not contain Germs after dehydration anymore, which could get into the ground. In addition, the dried feces can be used as fertilizer for agriculture. The dry toilets also produce only a slight odor nuisance. Flush toilets are not suitable due to the water shortages and an additional power supply requirement, so their implementation would be considerably more expensive.

In order to achieve better hygiene for the students, hand basins fed by rainwater will be attached. The rainwater is being collected on the roof of the sanitary complex. In preparation for the second phase of the project, additional showers will be built, which can be used with washbowls after the customary local method, until the next part of the complete installation has been completed. Therefore no pumps, just a power supply for the use of the LED lamps will be necessary for the implementation of the first section. A small PV-system will be installed for this, which will be extended for the second phase of the project to also operate the pump. To save energy the LEDs will be operated by a timed circuit, which will prevent the bulbs to burn unnecessarily long.

Project Part 2: Installation of a cistern and a water filter (Summer 2016)
In addition to equip with sanitation, the focus of our work project is the supply of drinking water for the students. A common rainwater cistern will be built for both the process water and the drinking water, from which the respective required amounts of water can be taken. A higher priority is the water shortage on the provision of the drinking water, so the waste of water can be excluded. On one side the workup of the drinking water takes place after a pre-established concept of our previous project at the Ssama Primary School, which has been completed in 2014. On the other side the cistern has a capacity to provide wash water for the showers. Water from the cistern is therefore being pumped into the water tanks, which were directly fed by rainwater in the first part of the project. 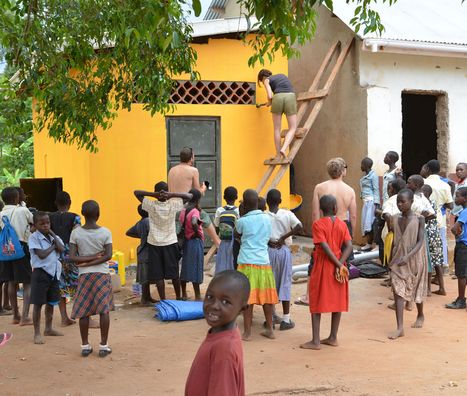