The 6th TOOLS FOR LIFE school was inaugurated in April 2015. Our foundation partly funded the construction of a new school campus in Mbousnakh, Senegal. The campus comprises eight classrooms including furniture, an administration wing and restrooms. The municipality provided the property. The project was finished end of March and the inauguration was celebrated during the Easter holidays.

The school counts 458 female students divided into 7 classes. 10 teachers, 3 security guards and the headmaster form the staff. We are very proud, that the students took the BFEM exams for the first time this year. This is a true achievement in light of the difficult learning conditions the students had to cope with over the last 4 years before the new Collège was finished.

The number of students increased rapidly over the last years. More an more parents send their kids to school as they understand how important education is for a prospective future. Besides, the compulsory school attendance has been extended from 6 to 10 years. In 2013 Mbousnakh counted 210 students whereas the school year 2014/2015 started already with around 500 students. Thus it was inevitable to build new school premises.

The original buldings were opened by the education authority in 2011. They consist of three straw huts and a little old shop that is used as teachers' room. All rooms are windowless and have no electrical light. During each holiday period the straw huts are damaged and destructed by the free wandering cattle. The reparations have to be done by parents and students before school can start again. Some time ago the commune of Tassette, who is in charge of the school, built one additional classroom. But that was far from being sufficient for the increasing number of students. 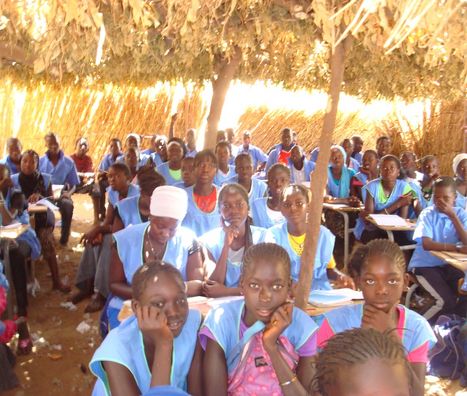