Hydroelectric power plant on the island of Idjwi - DR Congo

TOOLS FOR LIFE supports the expansion of a small hydropower plant on the second largest inland island in Africa, Idjwi, with 10,000 €. In phase 1, the hydropower plant will first supply an industrial park and then the most necessary infrastructure of the city of Bugarula with inexpensive electricity.

The Democratic Republic of Congo is one of the poorest countries in the world. In the 1990s the economy collapsed completely due to a civil war. In the Eastern part of the country, some regions are still under the control of armed groups.
The island of Idjwi is not connected to the state electricity grid. The approximately 300,000 inhabitants live for the most part as self-sufficient farmers. Economic development is limited due to the inadequate power supply. Electricity is mainly produced with diesel generators. This is both expensive and harmful to the environment.
A local non-governmental organisation has built a small hydroelectric power station near Bugarula with the aim of promoting the economic development of the region.

The project comprises the extension and rehabilitation of the power plant. In addition, the power grid between the power plant and the industrial park will be extended to enable higher transmission. Only a fraction of the possible capacity can be transmitted until the power grid is completed. After that, with the exception of the dry season, a capacity of up to 24 kW is to be achieved. During the dry season, a capacity of 10 kW will still be possible. This capacity will supply 11 companies in a nearby industrial campus.
After the completion of further project phases, the power plant will generate enough energy to supply electricity to other companies on the industrial campus and critical infrastructure such as a hospital ward and schools in Bugarulas.
The supply of the industrial campus will secure important jobs and training places. The income generated by the power plant will guarantee maintenance and repair. This is important to ensure the sustainability and long-term nature of the project. 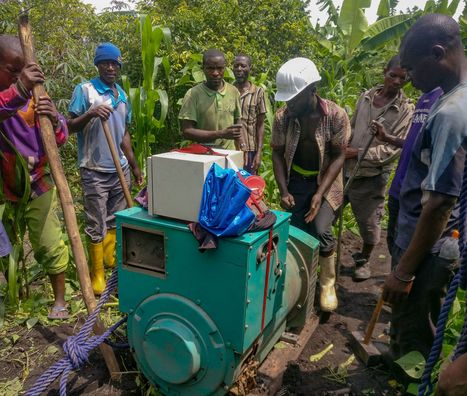 Information on the current status of the project can be found on the website of our partner organisation EWB https://ewb-karlsruhe.de/dr-congo/blog/ (german)
Learn more about the country